It is crazy that we have to actually teach our children about winter.  But since we live in the desert, it is a concept that is pretty foreign to our girls.  It snowed one time here in the desert  in the last nine years, but we live next to mountains that get snow every winter.  The only problem is, we don’t do mountain roads (no thank you!); so endeavoring to teach a preschool unit on winter was a little daunting.  That is why when we got a winter storm in the middle of our first week of our unit, I was so thankful to be able to point out the snow on the mountains to G and have her exclaim, “Winter!”  It worked!  She has a basic concept of what winter is and that is what I was going for!

Monday, I tossed some items into a sensory bin for G to play with.  We did this while W slept and it was a great activity for G!  I initially included cinnamon sticks, pine cones, snowflakes, and some fake snowballs with glitter in the box.  She enjoyed smelling the cinnamon and taking the snowballs out by the handful.  She enjoyed the pine cones for a moment or two but she did not want them to be next to the snowballs.  We counted the snowflakes, the cinnamon sticks and the pine cones and made the snow fall.  It was great fun! 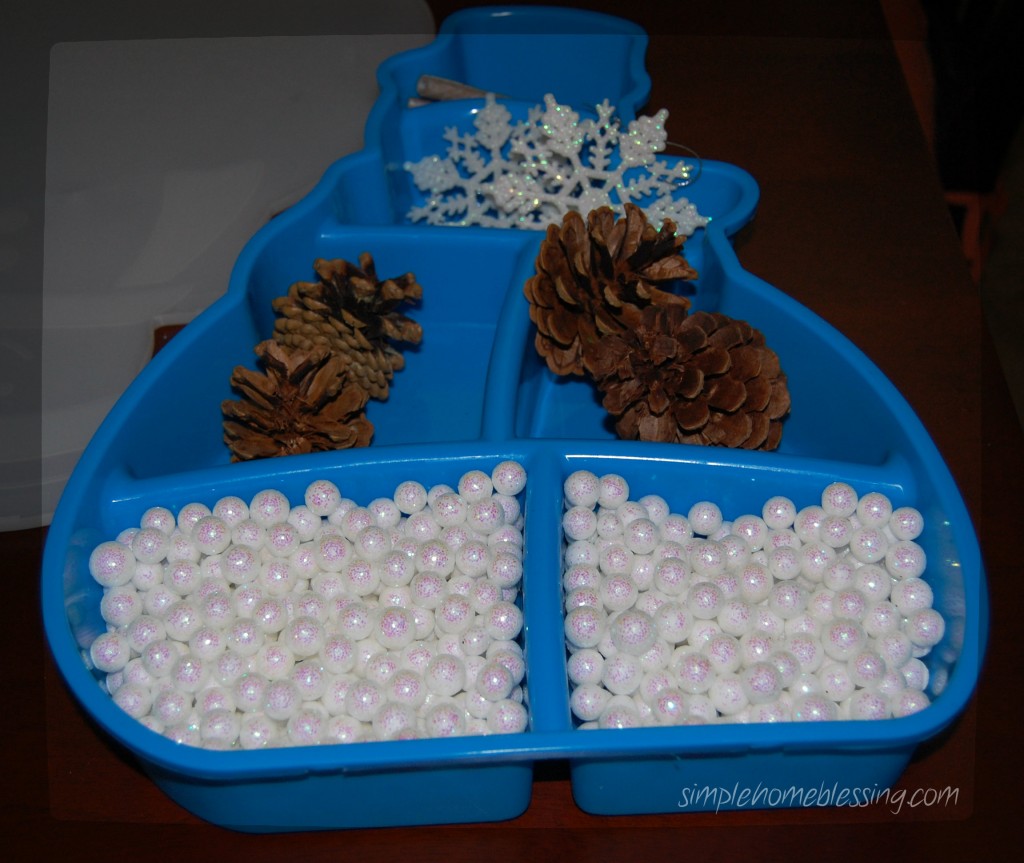 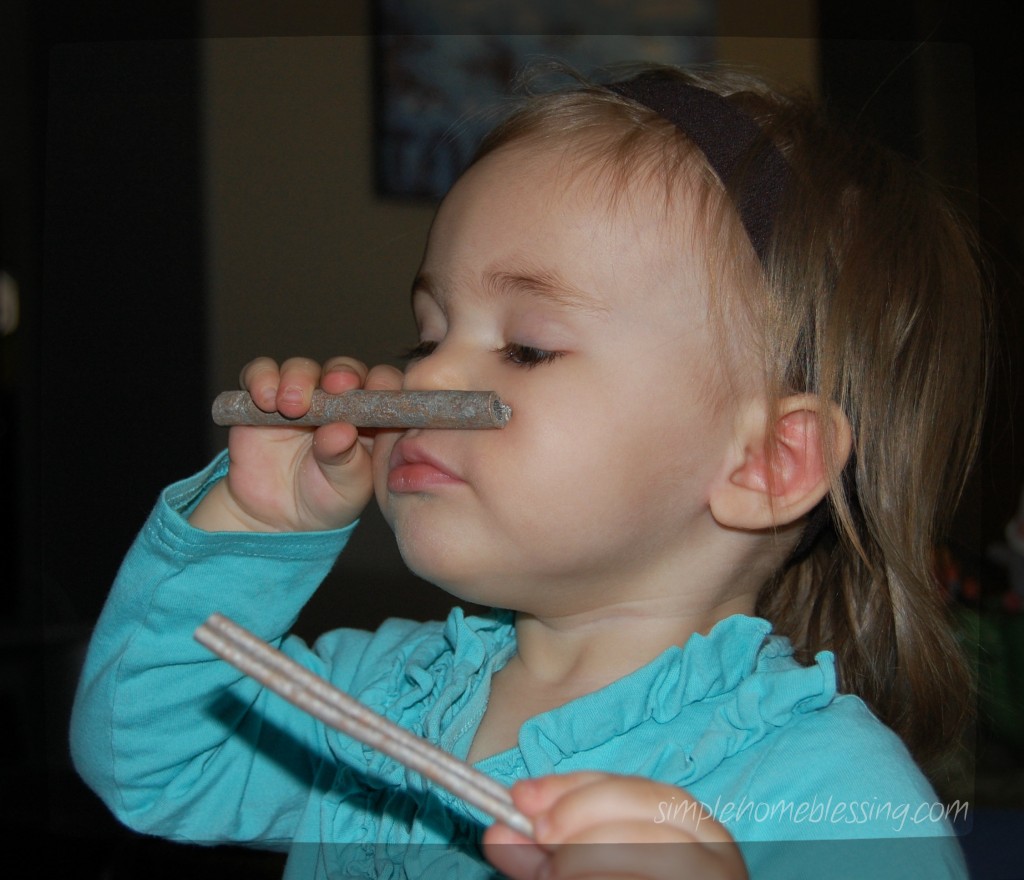 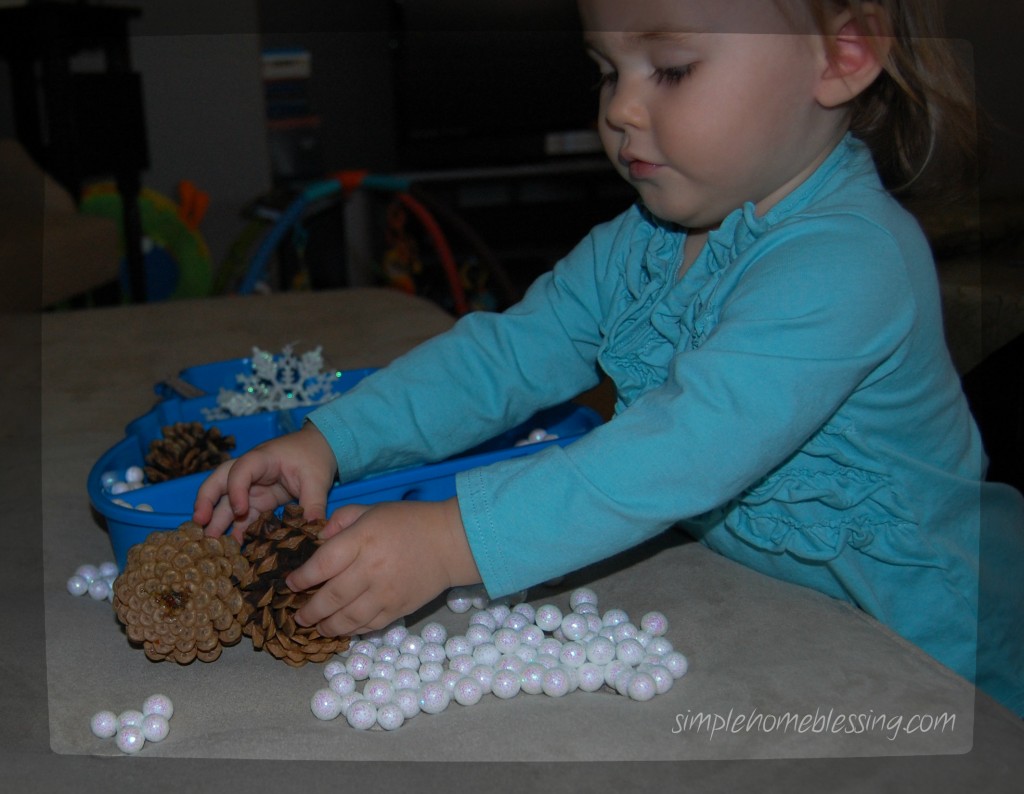 For our story time with W, we had Gran read Frosty the Snowman to the girls from one of those Hallmark recordable story books.  G loves those because she gets to hear someone she loves read to her…I think she thinks it is magic.  We sang, “Jingle Bells” and “Frosty the Snowman” and “Let it Snow.”

Tuesday, I was preparing for the day and getting breakfast together when I had a spark of inspiration! Those don’t happen often, so I jumped on it and decided to take the snowballs from the sensory bin the day before out and replace it with coconut snow.  We had some left over from a previous recipe and it made for perfect snow and snowfall.  I also added in some large felt snowflakes. 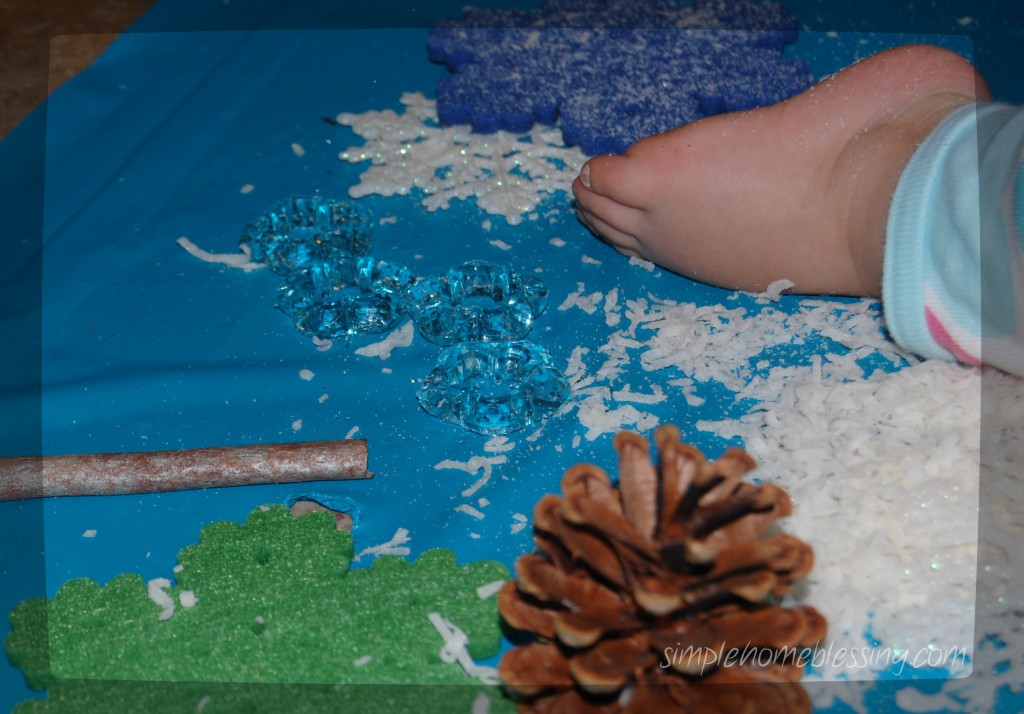 We started our day by drinking from a snowman cup with breakfast and then making some ice.  For this I just took some blue colored Kool-Aid and a blue ice-cube mold and poured it for G to see.  We talked about filling and pouring and we talked about liquid and ice.  She enjoyed dipping her fingers in the unformed ice cubes and sucking her fingers to make sure the flavor was just right.  We used these ice cubes for the rest of the week for a special treat, putting a few in the snowman cup and then filling it up with water. 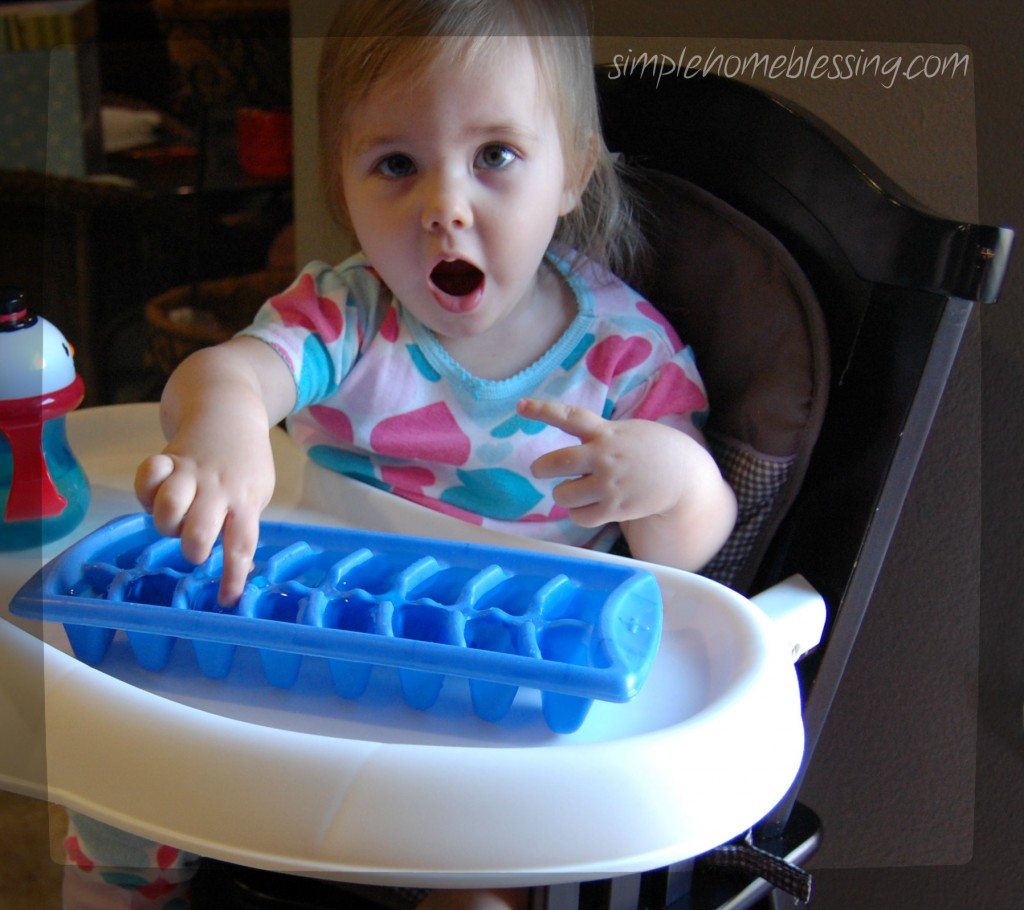 Wednesday, the grandparents came over to help out in the afternoon and G enjoyed showing them all the items from her sensory box and making it snow.  It was sure messy, but lots of fun!

Thursday, we talked about clothing for cold weather in the winter.  I printed out a free printable book from Playing with Words 365 called Snowman, Snowman What do you See?  It is perfect for introducing winter weather clothes.  We read this throughout the week and G really loved it because it was patterned after one of her favorite books (Brown Bear).

We also had fun with a dress up bin of my scarves.  It is ridiculous how many scarves I have (you never know when the occasion may require just the right one) and so I got out a bunch of them and we played with them, trying them on, looking at ourselves in the mirror, counting them, and generally just being silly.  It was great fun!  We also tried on winter hats and gloves (I am telling you these are foreign items around here!). 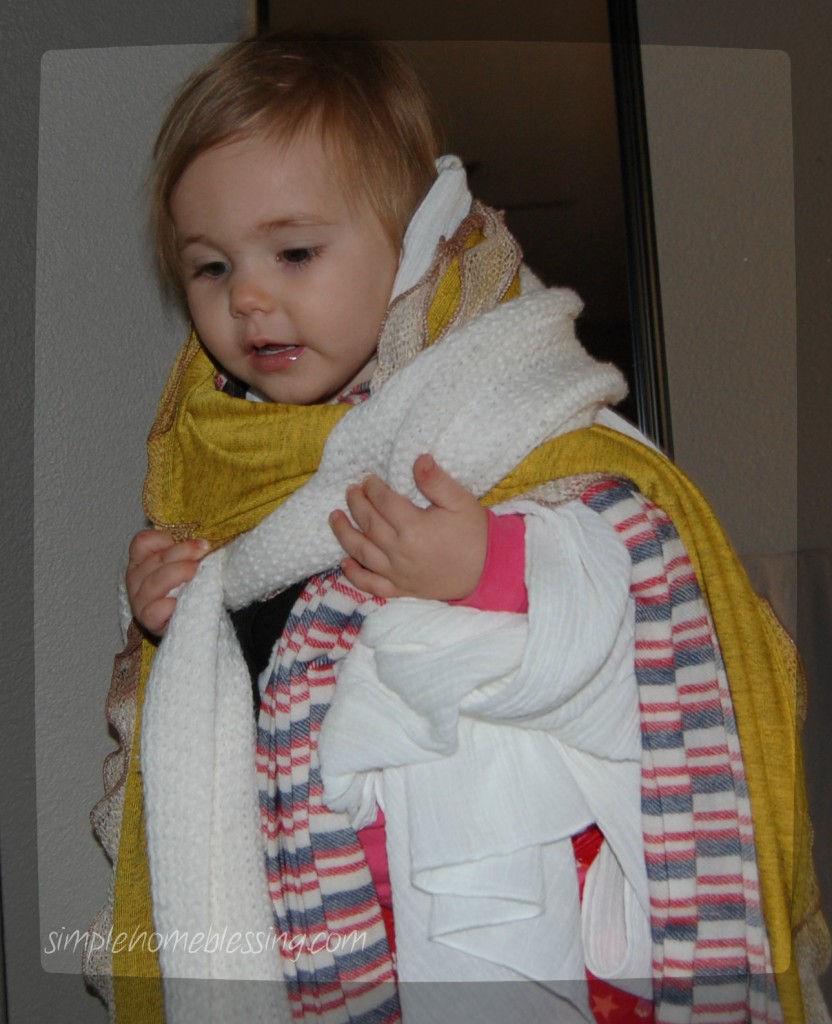 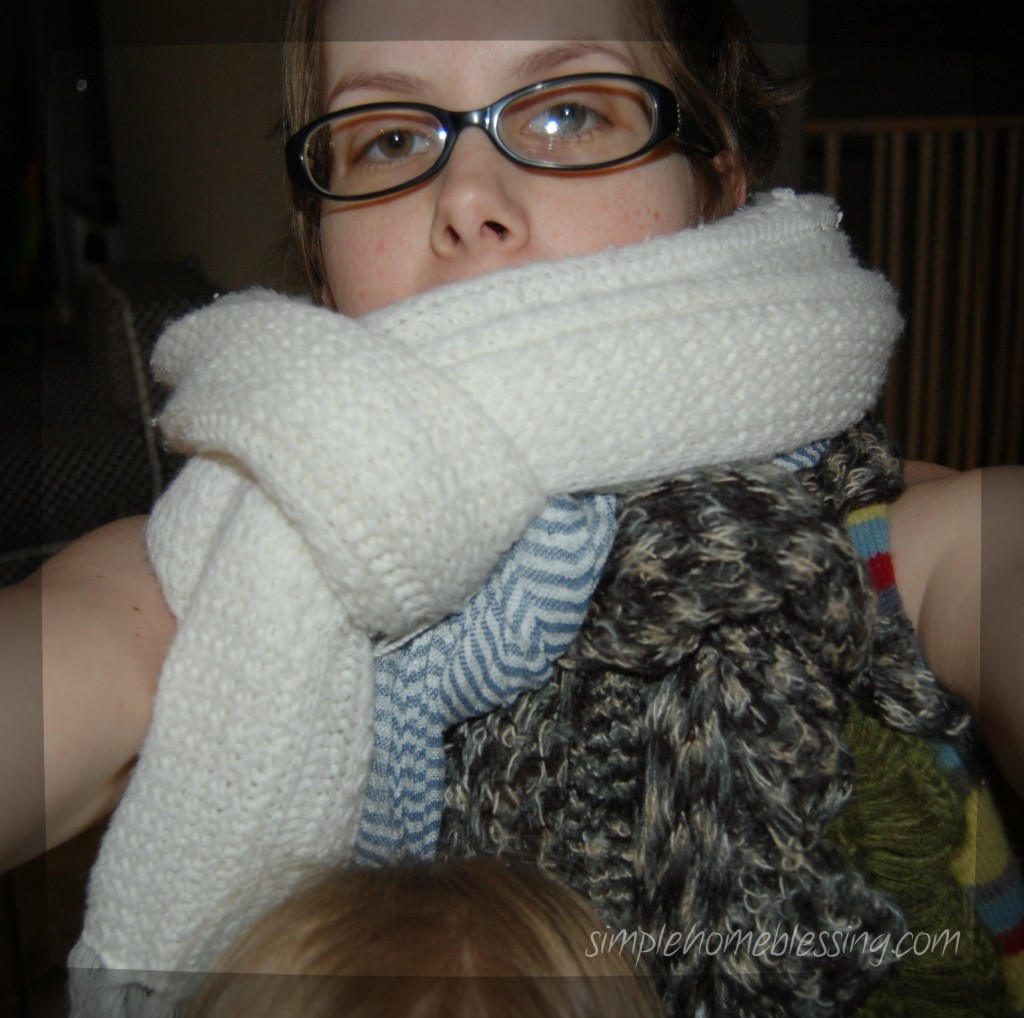 Friday, I had scheduled a field trip to go up to the mountain to see the snow live(!) and in person(!), leaving little W with Gran, but there was a large snowstorm that blew through on Thursday and at the urging of my husband we postponed it.  Funny that a snowstorm could be the reason we stayed away from going to see the snow.  We still talked a lot about winter and this was the day that G shouted, “Winter!” when I pointed out the snow on the mountains.  So, all was not lost!  But I did get the chance to go to the public library and stock up on books about winter, so we had a mini-marathon of reading in the afternoon.  Some of our favorites are Snowmen at Night and Snow Dreams.  G really loves her snowmen!  Before dinner, we made brownies in a snowstorm (more about that later). 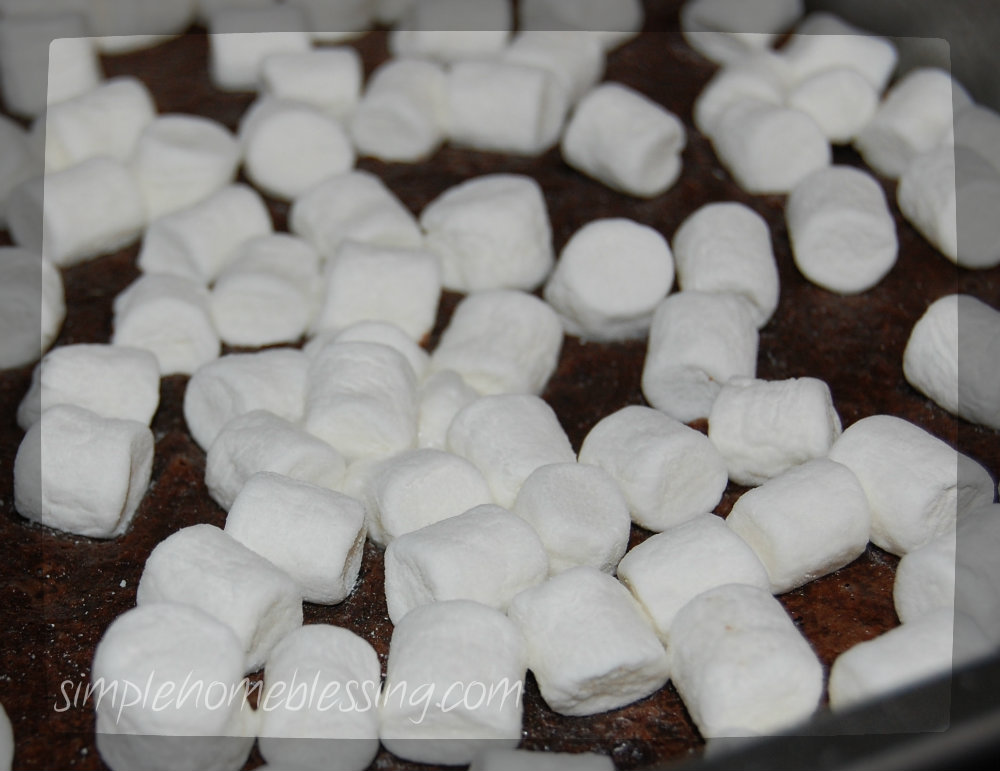 Saturday, for bath time we had a snow bath!  Boy was this fun!  (It was just shaving cream, but G really enjoyed it and since she has never seen snow, it did not have to be authentic.) 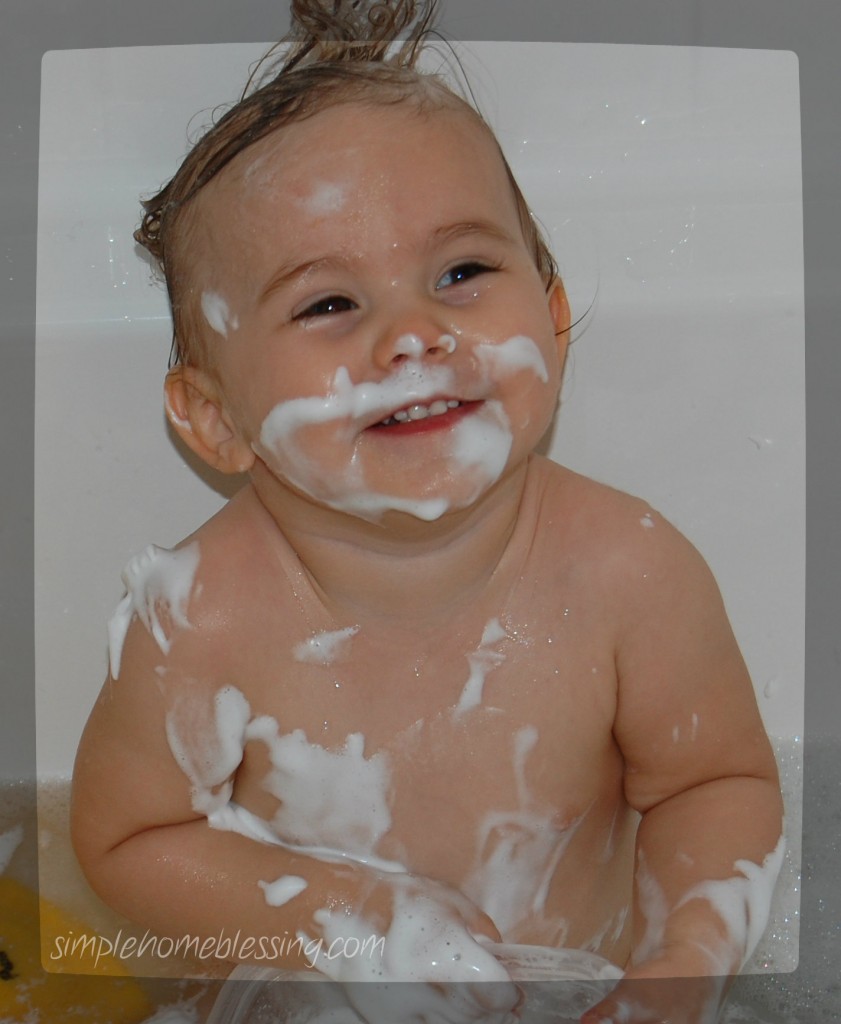 Because the field trip got postponed and I found a lot of great ideas on pinterest regarding winter, I decided to make our unit into a two-week unit, so we will have many more fun winter activities next week.  But here is a great one for kids a little bit older from my sister-in-law’s blog, Frugal Fun For Boys.

What did you do with your little ones this week?

I am linking up to the weekly Tot School Gathering Place.  Go check out the link up to see more amazing ideas.  If you are visiting from there, please leave a comment, I would love to hear from you!