We are finally getting back to a structured (as structured as an 18 month old will allow) preschool after a long hiatus to have a new little one.  That doesn’t mean the learning stopped in the interim, but most of it was spur of the moment teaching.  I love that type of learning situation for our little one, but I am excited to have unit studies and plans to fill her days.

So to get started for the new year, we started at the beginning – the very beginning – and talked about the creation all week.  Starting on Monday we talked about each day of creation for a day and tried to do an activity that would reinforce the VERY basic concepts we were trying to teach her.  We wanted to start to expose her to the fact that God created all we see around us.  I mean, if the 6-day creation is something that even mature Christians can get lost trying to figure out, we weren’t going to start to teach scientific concepts just yet (But soon…I hope!).

The theme verse for this unit is “In the beginning God created the heavens and the earth.” (Genesis 1:1)

Here’s how we did it:

Monday: Day one of creation.  We read the account of God’s creation of light in our Candle Bible for Toddlers in the morning and said our theme verse.  In the evening before we went to bed we did a hand’s on activity (included in this post) to demonstrate the difference between light and dark and that when God spoke light into being, it happened!  G’s little eyes lit up the first time we did this and it was so neat to watch! 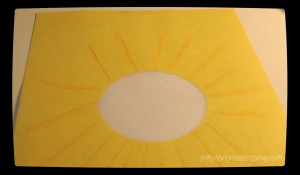 Tuesday: Day two of creation.  We read the account of God’s creation when he separated the water from the water and said our theme verse.  We went on a walk and looked at and pointed out the clouds in the sky (I was so thankful we had clouds all week.  We normally do not have clouds in the sky around here).  When we got back, we did a craft (check it out here) that reinforced the concept of clouds and water.  This helped to develop G’s motor skills a little bit and she enjoyed doing it.  When bath time came around, we talked about waves and I showed her how to make them by running her hands back and forth under the water.

Wednesday: Day three of creation.  This was a big day around here because our alphabet exploration (more on that in a post later this week) crossed paths with our preschool unit very nicely resulting in lots of activities and reinforcement of basic concepts.  We started out by reading the account of God’s separation of the water from the land and his creation of plant life with seeds.  We would have gone for a walk to look at plants, but the stroller ended up in my husband’s car and he was away most of the day.  Instead, we did indoor activities.  We built a megablock apple tree (I am a little to proud of how this worked out).  While we were building it we talked about colors and building concepts and counting.  Once it was built we counted the apples on the tree and (of course) had fun “chopping it down.”  During snack time we made Slow-Cooker applesauce which gave me an opportunity to show Grace the parts of the apple (peel, fruit, and core) and talk about cutting and peeling the apples.  We also did a lot of counting and talked about colors.  This was a big hit (look for the recipe later this week, as well)! 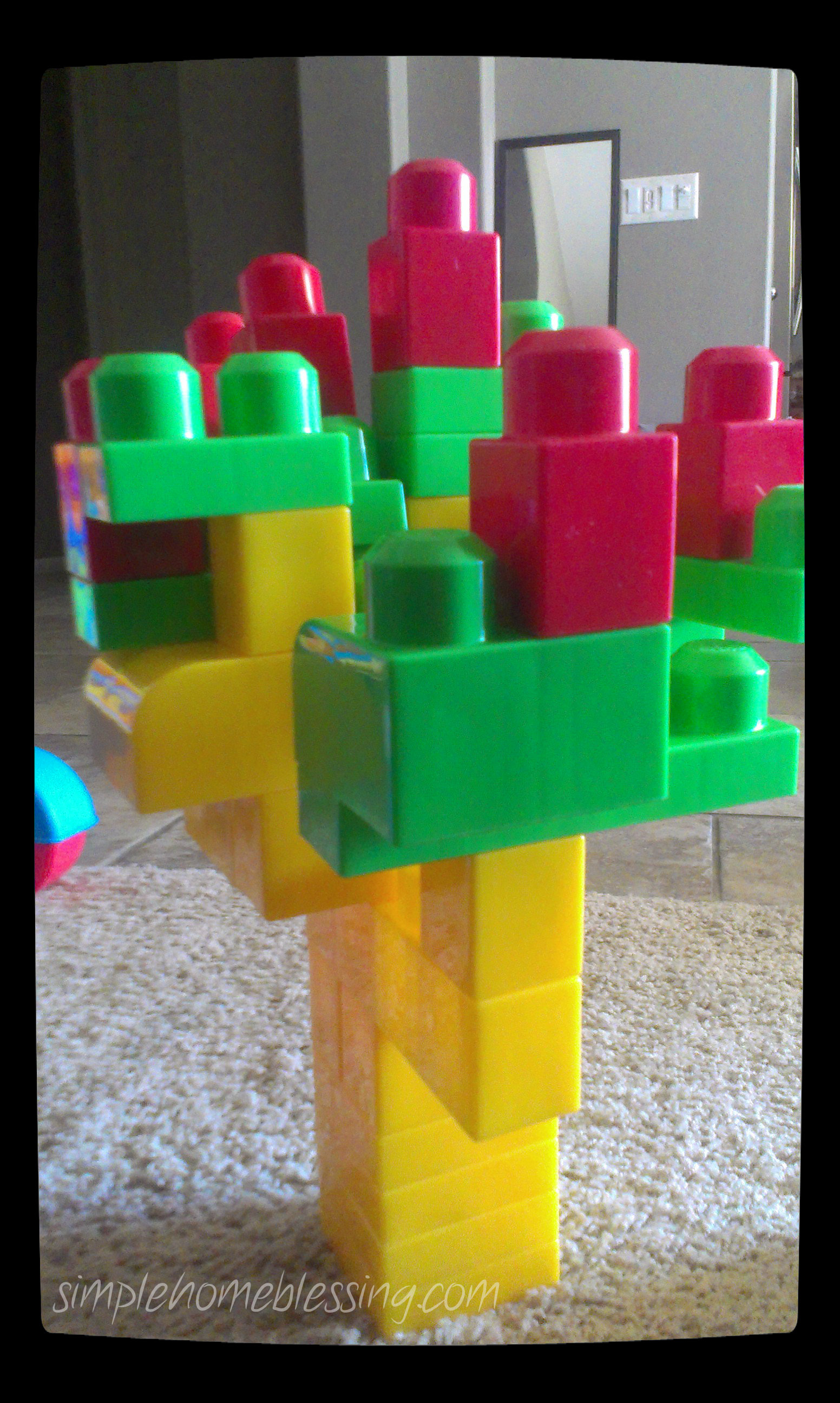 Thursday: Day four of creation. We had a little bit of an off day for the sun, moon, and stars, but we did read the creation account and we looked at some crafts we had done previously involving stars.  We sang “Twinkle, Twinkle Little Star” A LOT (it is a current favorite for G…she says “Jingle, Jingle Little Star” and we read Goodnight Moon during bedtime.  We also did a sponge painting activity with a homemade star stamp. 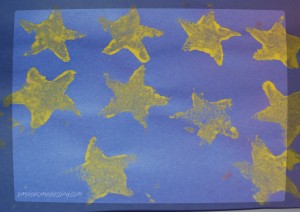 Friday: Day five of creation.  We began the day by reading the account of God’s creation of all the sea creatures and the birds of the sky.  I scavenged around the house and found all the sea related toys we have and we spent some time playing with the stuffed coral reef G has but rarely plays with.  We named all the sea creatures by their names and had fun swishing them in and around and through the coral reef.  Oh, and we spent some time making fish faces and talking like fish.

We also looked around the house and talked about different birds we have in the house.  Our Christmas tree is still up (waiting on yet another extended family Christmas celebration before we take it down) and I have quite a few bird ornaments on it.  We took time to find each of them and talk about the sounds that birds make.  G has a tendency to yell, “Bird” whenever she hears tweeting outside our window, so each time she did that I made sure to remind her that God made those birds.

Saturday: Day six of creation.  We began the day by reading the account of God’s creation of the animals and man.  Whenever an animal was mentioned, we said, “God created that animal.”  And whenever we talked about body parts (a current obsession) or baby sister, we said, “God made that/her.”  We spent some time talking about what sounds animals make (as we do almost each day).  Before bed, we set up G’s ark and lined up all the animals to go into the ark.  She really likes to line things up in order and this turned into taking out every stuffed animal she owned and piling them all up on the blanket.  But this was just another opportunity to point out that God created each of them!

So that was the fun we had around here last week for preschool.  What did you do with your young ones? I am linking up for the first time to Tot School through 1plus1plus1equals1.net, so if you stopped by through that, leave me a comment and I will drop by your post.