We are starting a new unit that will take at least 7 weeks, but I am considering taking a week or so to do some Valentine related things.  This unit is on the colors of the rainbow, culminating in a “review week” where we talk about rainbows.

The purpose of this unit is to teach the colors, encourage recognition and differentiation of color, and to explain the reason we have rainbows.  I am hoping that someday during this unit we will go outside and actually see one; but I am not holding my breath because we live in the desert and a rainbow is a rare thing.  I guess when you live in a desert, God knows you aren’t really concerned about flooding as much.

Our Bible verse for the unit is Genesis 9:13, 15: “I set my [rain]bow in the cloud…I will remember.”  We will be doing a lot of Noah’s ark discussion during this unit. We will also be working on a craft project throughout the unit that ties into the Noah’s ark theme.

So here is what we did for red week:

We dressed in red as much as possible.  Red is not really my color, so I just threw on a red sweatshirt around the house.  But G has a red jacket that is adorable, so she wore it whenever we went outside.  Even little W got in on it one day. 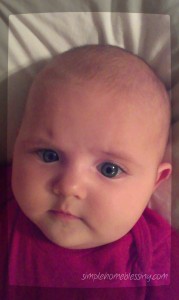 Whenever anyone was wearing red, we talked about the article of clothing and the color.  We even talked about the red hats and aprons the staff members were wearing at the In N Out drive-thru (reason enough to visit, right?).

We also ate red foods.  Strawberries, cherries, strawberry yogurt, cherry yogurt, strawberry gelatin, red bell peppers, red potatoes.  These were eaten off of a red ladybug plate and scooped up by red spoons and forks.  On Wednesday, we made some red gelatin.  G helped me pour the cold water in and “stir, stir, stir” it up.  Then we poured it into smaller bowls and put lids on them to wait for it to set up.  She LOVED the gelatin – this reminded me that I need to make it more often! When it came time to eat it, we put a little whipped cream and sprinkled some strawberries on top – yum! 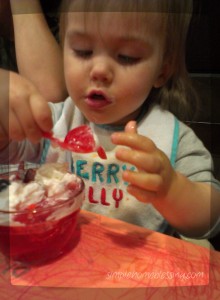 We went on a red scavenger hunt in the grocery store and found red roses and other flowers, cherries, tomatoes, apples, strawberries, and red bell peppers.  This gave us a chance to learn not only the color, but the names of different fruits and vegetables.  She still gets berries and cherries confused, but they do sound a lot alike and they are all sweet.

We painted with the color red one afternoon.  We stamped on construction paper with apples and painted using a silicone basting brush from the kitchen.  This led to G painting her feet and shins and hair and hands. 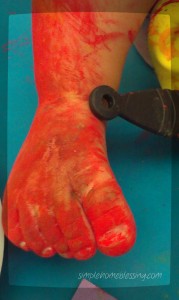 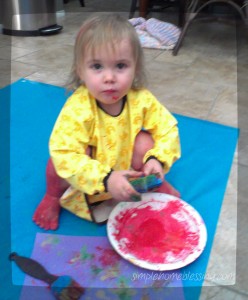 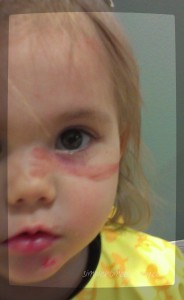 This led to an unplanned red tinted bubble bath.  The bath was not red until G got in, but it was kind of fun to have the water a different color.  When she got out of the bath, she colored with red crayons while I made dinner.

We also tore red construction paper.  I did not realize until we were doing the actual tearing that tearing is a motor skill that needs to be learned.  She did it, but with some difficulty at first.  It was amazing to see her straining to tear a very delicate piece of paper all because she did not realize that it made more sense for her to put her fingers close to one another to start a tear.  Very interesting.

I created a red bin for her red toys.  It was supposed to be a sensory bin with rice dyed red, but I discovered half way through the week that I don’t have any food coloring, so it was just a toy bin for her red toys, but she seemed to like it just as much!  It had puzzle pieces, tissue paper, building blocks, maracas, a recorder, and ladybug bowls with lids (all in shades of red). 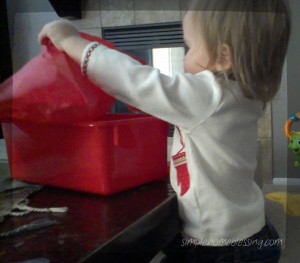 She also had a “What’s in the Bag?” bag for upstairs that had a car, a ball, her see and say (colored red on the outside), a polar bear with a red scarf, a soft block, and an apple toy.  Having a separate set of red things helped to reinforce the concepts of color even when we were not “doing preschool.”

We read lots of red themed books.  Our favorite for the week was Ten Red Apples by Pat Hutchins (a very repetitive book) with a farmer and his animals.  But we also enjoyed Little Red Riding Hood (I don’t think G got that it is really a disturbing story) and another book about a red blanket (I should have written the titles and authors down before returning the books to the library).  We also read some of the books G has about the colors and placed a little more emphasis on the pages focusing on red.

During our morning story time with W, we red W’s Clifford the Big Red Dog fabric book and read the account of Noah in G’s toddler Bible.

While G was sleeping one day I made a drum for her using a popcorn tin that was lying around the house and some construction paper and tape.  It was a fast and loose kind of craft (no scissors used), but she very much enjoyed playing her red drum.  We improvised some petite bamboo spoons as drumsticks and she was well on her way to becoming the next Charlie Watts.  I tried to do some pattern drumming with her, but very quickly realized that she just wanted to hit the drum and didn’t care about making a rhythym.  But we did teach her the word, “tap”  which she used with great success thereafter. 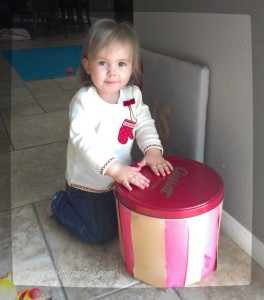 We also sang this song as we drove around town and saw red cars (sung to the tune of “Are You Sleeping, Brother John?”):

Do you see the red cars?

Yes, I see the red cars,

I had to go out for an appointment one day, so G got to spend some time with Grandma and they worked on a ladybug craft.  It turned out beautiful!

Whew!  What a wonderful rose colored week we had!  By the end, G knows the color red on sight, so I guess we were pretty successful.  On to orange next week!