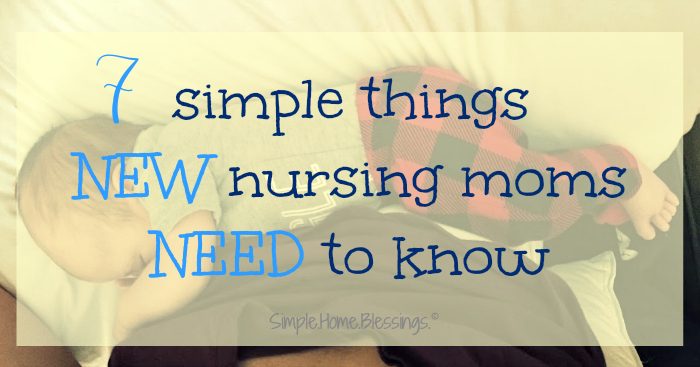 Nursing is amazing, isn’t it?  Just think of it.  You carried your little one in your tummy for around 9 months, feeding and nourishing him until he grew large enough to enter the world and thrive.  And then…and then, God has designed your body to switch gears completely to feed and nourish your little one for months (sometimes years, right?).  It is miraculous, really!

Notice I didn’t say nursing was easy.  But it is miraculous.  If you are considering nursing your little one for any period of time after he is born, you may need a little bit of encouragement along the way.  Because, honestly, as natural as nursing is, it doesn’t always come naturally.

After nursing FOUR little ones, I have learned a LOT about nursing.  I am still not an expert, but I have learned plenty.  That knowledge has helped me (and encouraged me) along the way.  So I thought I would share with you the simple things I think nursing moms need to know.

You need to make friends with a GOOD lactation consultant

I started going after my first baby wasn’t really putting on weight even though she was eating and sleeping and peeing and pooping.  She was three weeks old and she was a tiny little thing.  We discovered she didn’t have the best latch, but she also had an extremely fast metabolism.  She was never a chubby baby, and was tiny for a long time.

It would have been easy to lose hope in the nursing process with my first baby.  But having my lactation consultant as a resource, telling me that I could look at other factors than weight to observe her growth, was SO encouraging!

The latch is the key

Baby’s latch is the number one determiner of your ability to nurse as long as you would like.  Getting it right from the beginning is so important.  When it is off in the beginning, breastfeeding is almost always more painful than it should be.  I honestly didn’t believe it after my nursing my first baby, but breastfeeding is not supposed to be painful.  The times that it was painful for me were the times my oldest and my youngest had troubles with their latch.  Once the latch was adjusted for them, nursing became comfortable.

My second and fourth babies were proof to me breastfeeding was not painful.  I NEVER had soreness, NEVER needed lanolin, NEVER had any problems with pain while nursing them.  They are also my chubbiest babies. And the second one (W) is still my most determined eater!  In order to get her latch just right, we called our lactation consultant over to our house the night after we got home from the hospital to help us.  The cost of that private session was so worth it!

Tongue-ties are more common than you think.

Full disclosure here: until last year I had no real concept of what a tongue-tie was.  I had an image in my mind of what it looked like, but I didn’t quite get the concept.  And even the image I had in my head wasn’t quite accurate.  But tongue-ties are more frequent than you might think, especially if you are having difficulty in getting nursing started.

The tongue-tie affects the latch of each baby to a different degree, depending on the severity of the tongue-tie.  And it is good to keep in mind that tongue-ties often run in families.

What is a tongue-tie?

If you are unaware, a tongue-tie, is the result of extra connective tissue at the base of the tongue (where it connects to the bottom of the mouth).  Related to tongue-tie is a lip-tie, where extra connective tissue exists at the place where the top lip meets the top gum (above the front two teeth).  The reason it is called a tongue-tie is because it can cause the tongue to look like it has an invisible bow or tie on it, pulling the tongue in at the center.

Our third little one was diagnosed with a tongue-tie after a couple of weeks of nursing.  He was incredibly fussy on the breast before we found out about the tie.  My sister-in-law mentioned that he might have a tongue tie and my lactation consultant agreed and recommended we visit a pediatric dentist to know for sure.  I took him into the dentist a couple of days later and he confirmed the tongue-tie, as well as a lip-tie.  He did a laser procedure to remove the excess tissue and sent us home with some aftercare procedures to follow for about a week.

My little one ate like a champ after he had the tongue-tie taken care of!  It made such a big difference in his fussiness.

A little formula does not destroy the nursing plan

A little known fact for the breast-is-best-you-can’t-do-anything-else crowd is: formula is not poison.

People really take some serious stands about breastfeeding (and all manner of other parenting choices), but the bottom-line is:

formula is food for your baby,

breast milk is food for your baby.

And if life happens in such a way that your baby is fed formula for a few feedings, the nursing plan can still go forward!

While I do think that breast milk is best for babies and I chose it for my babies (all three).  There were times with my first baby and my third baby that we used formula.  In fact, within just hours of returning home from the hospital with baby number three, I had to return to the ER for a medical situation which required me to be away from him during feeding times.  As hard as it was for me to know that he was getting formula (at a very critical time in his breastfeeding development), I knew he was being fed!  And that is better than letting him go hungry.

Your boobs set a schedule according to baby’s needs

Remember when I said breastfeeding is miraculous?  It really is!  After nursing three babies, I realized each baby’s schedule and feeding needs are unique.  And the same set of boobs fed all three of my babies, even though they were so different from one another!

What happens along the way with your baby and your boobs is they develop a way of communicating supply and demand to one another and they set a schedule to make sure baby stays satisfied.  And your job as mom is to make sure they stay on schedule.  That means if you are away from baby during a regularly scheduled supply transfer, you need to pump as close to that time as possible so baby can stay on schedule.

One thing to remember about your milk supply schedule is baby will get fed (even if it is formula), but your boobs will not release their milk unless you feed or pump.  I know that sounds simple, but it doesn’t work to just wait until the next feeding and give baby more.  Your boobs will be off their schedule and will not get the important demand message for more milk to be produced.  Yes, milk will continue to accumulate, but the demand will not be as strong as when baby empties the supply and sets in motion another demand for more.

Milk supply is there, really, it is.

Along about 4 months, you may feel like it is gone, like baby isn’t getting enough.  This is usually when baby is starting to sleep for longer stretches, maybe even through the night.  Keep at it and resist the urge to supplement.

If you are really concerned about the supply, you can change your diet before you change baby’s.  Taking supplements or adjusting your diet to include more “milk-producing” foods may keep you on track with your nursing goals.

This was another thing I learned from my lactation consultant.  I just happened to run into her when my littlest one was about 4 months and I was having this problem.  She first asked, “Could you be pregnant?” NO!  And then she asked, “How old is he, again?”  When I said 4 months, she said, “Oh, that’s the way everybody feels at 4 months.”  She gave me some tips to keep at it (stay on schedule, eat good “milk foods”, and resist the urge to supplement with formula for meals).

The bond with baby doesn’t stop when nursing stops.

The world does not end when your baby stops nursing before you are ready.  Yes, it is a loss.  But it is one you can get through, enjoying the breastfeeding season for what it was.

I have to be honest, I was ready for my first baby to be done with nursing at 6 months.  She didn’t have that great of a latch, so when those teeth came in the pain was unbearable (and the latch was not going to change) – she didn’t bite me, the teeth rubbed blisters onto my breasts (sorry for the overshare!).  We made it to 7 months and I was more than ready to transition her to formula and first foods!

With my second and third babies, they finished nursing before I was ready.  And it was harder to make the switch.

The bond does not end there!  There are still plenty of moments for cuddles and sweet cradling with baby.  And skin-to-skin contact doesn’t have to be just for breastfeeding times anyway.  The bonding benefits of breastfeeding are wonderful, but the bond you have created with baby will go on.

I SO enjoyed the nursing phase with my babies!  Much more than I ever thought I would.  It didn’t come naturally to me.  It took a lot of learning for me and my babies – but it was so worth it!  I hope these simple tips will encourage you on your own breastfeeding journey with your little one!  Blessings to you, mama! 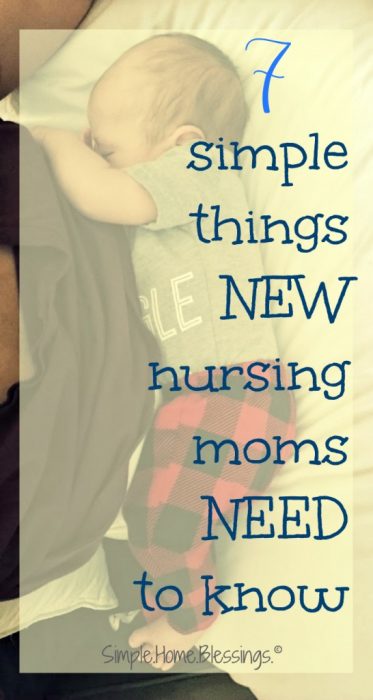