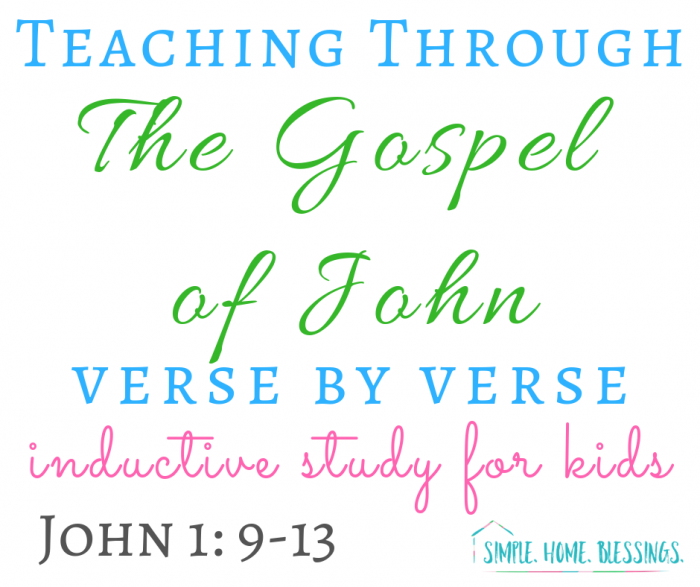 We have finally gotten back to our study of the book of John.  We went off track for quite some time to study the book of Genesis.  I am hoping to get through quite a bit of the book in the next few months.  Hope springs eternal.

If you have followed along with us on our study of John thus far, you will remember my thoughts on presenting this material to children is incredibly simple and it is inductive/classical in approach.  I do not try to make it more than it is and get to the deepest meanings.  I am just wanting to present the basics of the Bible to my kids.  We spend much of our time in the Observation (attending) stage of our study.

If you are new to this series and would like to catch up, you can find the rest of the posts in the series at the top of this post.  And if you have any questions, I am always happy to hear from you in the comments!

Since it has been so long since my kids and I talked about the book of John, we did a quick review of the first part of chapter one.  Thankfully, we have hidden the first 8 verses in our hearts through our Classical Conversations work in both Latin and English.  We can sing the songs and remember what it was that John had to tell us as he opened this important book.

I simply began our day with review and reading of the previous verses.  And I read the next verses, 9-13.  Then I drew attention to the true Light, writing the true Light at the top of our chalkboard table.  Here are my questions:

Then I reminded my kids the definition of a pronoun – “a pronoun replaces a noun in order to avoid repetition.”  I also reminded them of the male pronouns we would be looking for.  I asked them to listen closely to the Bible as I read about the true Light and say “ding, ding, ding!” when they heard a pronoun referring to Him.

As I read the passage, they dutifully listened and dinged at the appropriate times.  They requested that I make sure to emphasize the pronoun to help them out.  When we heard a pronoun referencing the true Light, I would repeat the clause and ask them this simple question.

“What does this tell us about the true Light?”

There were also some questions along the way.  He came into the world – “where was he before he came?”  He was not received by His own – “what does it mean to not be received?”  We ask a LOT of questions.

the world made by Him

the world does not know Him

came to His own

not received by His own

but He gave right to become children of God

When we were finished with our list, we read over it again.   But we needed to go back and look at an important word that seemed to come up a lot in this chapter so far – came/coming.

We went back to verse 9:

“There was the true light which, coming into the world, enlightens every man.”

We turned out the lights (it was daytime, so it was still pretty bright) and I asked, “When a light comes into a dark place, what happens?” The response: “You can see!” And that is just what this passage is saying – the light, the true Light was shining for everyone to see.  Let’s be the light.  We came up with hiding behind a place and then jumping out and saying, “Yea!”  Since we think it would be a celebration to see Jesus, the true Light.

It was kind of adorable.

Today we needed to draw attention to a contrast being made  in these verses.  Contrasts can be very hard for kids to notice and verbalize.  So this took a lot of questions as we walked back through the verses.  A simple chart was created as we worked through the passage.

I asked my kids to listen closely for two nouns/groups in these verses.  These two groups had two different responses to the true Light.  I started reading in verse 10.

Here are the questions I asked to bring out the information in the verse:

Where was Jesus? (in the world)  I drew a cross for Jesus and drew a circle around it; “the true Light came into the world.”

So the world has some sort of response to the true Light in the world, right? (yes)

What was their response? (they did not know Him) this was written on the table, too

What does it mean to know someone or something?  (to see it and understand it, to get it)

What was the world’s response to the true Light in the world? (they did not know Him)

That’s what we call ignorance.  When a person just simply doesn’t know.  Ignorance was written on the bottom of our list.

Next, I drew a line down the middle of our chalkboard table.  And asked the kids to listen to the next verse to hear about another group with another response to the true Light. 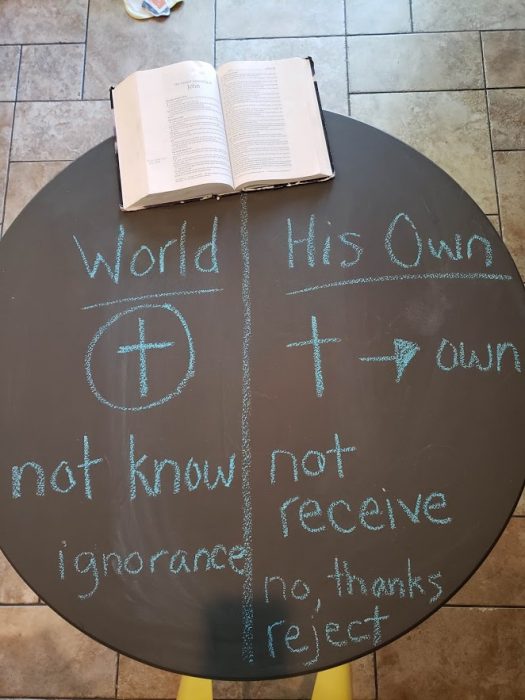 “He came to His own, and those who were His own did not receive Him.”

And here is a summary of our conversation:

To whom did Jesus go? (his own) We drew a cross, an arrow, and the word “own” opposite the cross under “world.”

Who are Jesus’s own? (his family, his friends, his country, his people) “His own” was written opposite “World” on the table.

How did they respond to the true Light? (they did not receive Him)

What does it mean to receive something?  Do you know another word for receive? (to accept)

So what does it mean when it says here, they “did not receive Him?” (to say no, thank you)

Once we had our simple chart on our table, we did a quick review of the two groups and the two responses.  Then I teased our lesson for Day Three by saying, “There is one more group and one more response people can have to the true Light.  And we are going to talk about that tomorrow.”

For our last day with this passage, we started with review (always).  I started by asking the kids, “What were the two groups of people we talked about yesterday and what were the responses they had to the true Light?”  (the world, did not know and his own, did not receive)

Then I told them there is another group with another response to Jesus.  Verses 12-13

Here’s a summary of our conversation:

What is the group of people mentioned here? (children of God, those who receive)

How do they respond to the Light? (they believe, they receive Him)

What do they become when they believe? (children of God)

Remember Jesus is the Son of God, so when we believe in Him, He makes us into His brothers and sisters!  We are born again! 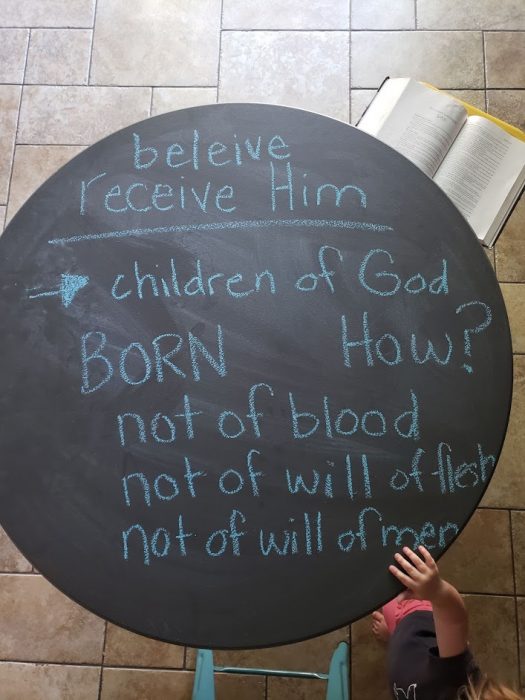 But HOW are God’s children born? Let’s look at verse 13.

How were you born? (I came out of your tummy) That’s right!  That is how all people are born, but the children of God aren’t born that way – not of the blood (point to the list).  So can you go back into my tummy and be born again?  (NO!)

Ok, so for this next part I am going to need you to really concentrate – REALLY HARD!!  Are you ready? (YES!)

Alright – I want you to close your eyes and try as hard as you can to be born again, really focus!!  (adorableness ensues)

So you are going to have to try even harder this time.  Can you do it? (YES!)  I want you to try really hard to make another person be born again!  (more adorable striving)  Is it not working?  But can you try on your baby sister?  She is really little – try with her! (more striving)

It doesn’t work when we try to be born again does it?  We can’t go back into our Mama’s tummy, we can’t try to do it in our own strength, we can’t even do it for someone else!  How DOES one become a child of God?  Let’s read that verse one more time.

(You have to believe and you have to receive Jesus!!)

It is so exciting to share these simple truths with my kids!  I hope our methods and conversations give you ideas of how you can present the Bible to your kids.  In this small passage we used the inductive practices of asking questions, defining words, and making lists.  By this simple practice, our kids will be able to study the Word of God throughout their lives!  What a blessing! 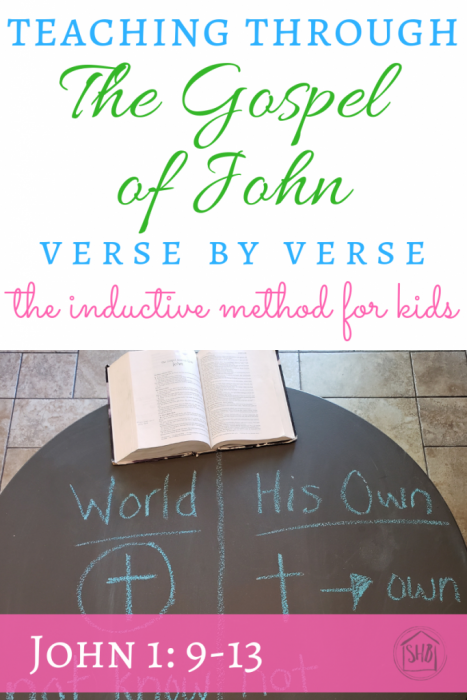